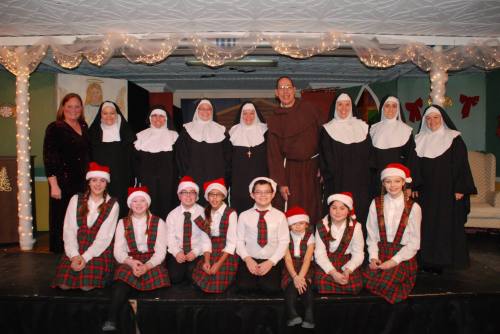 Theatre Company of Saugus is happy to announce our holiday season show Nuncrackers, the Nunsense Christmas musical.  With book, music, and lyrics by Dan Goggin, about a group of nuns who love to entertain, the Little Sisters of Hoboken.  They are taping their first TV special in the cable access studio built by Reverend Mother in the convent basement.  It stars the nuns you love, plus Father Virgil, and eight of Mount Saint Helen’s most talented students.

Featuring all new songs including “Twelve Days Prior to Christmas”, “Santa Ain’t Comin’ to Our House”, “We Three Kings of Orient Are Us”, and “It’s Better to Give than to Receive”, this show is filled with typical Nunsense humor, some of your favorite carols, and a fruitcake cooking demonstration by Sister Julia, Child of God.  This Nunsense Christmas Show will make you laugh, and maybe tug at your heartstrings.  It’s the perfect way to insure that your holiday season is merry and bright!

Tickets will be on sale in November, and will be $20 for adults, or $17 for seniors, students, and children.  If you purchase tickets by December 1, they are only $15 each.  There will also be some other ways to get discount price tickets.  See our Tickets page.

We are proud to announce the amazing cast of Nuncrackers.  Many thanks to all the talented people who auditioned.

In addition to the full-length performances, you can catch free previews of bits of the show:

Becky Rush, our director for Nuncrackers, has been actively involved with various theatre programs throughout southern NH since 2003, both on stage and behind the scenes. In the last five years, Becky has directed 28 youth and adult main stage shows and she has performed in 18 main stage productions at various community theatre companies in southern NH and in the Boston area. Her directorial and choreography credits include Annie Jr., A Year with Frog and Toad, Dear Edwina Jr., You’re a Good Man, Charlie Brown!, Seussical, Grease, Adventures of a Comic Book Artist, The Wizard of Oz (Young Performers’ Edition), Honk Jr. and many others. Becky currently serves on the Board of Directors for the Majestic Theatre in Manchester, NH where she is the Advisor to the Teen Board. She has taught various acting classes and summer theatre camps for youth with the Majestic Academy of Dramatic Arts. She has been a voice actor for commercials, and was also featured as a vocal performance expert on a local NH cable television series. Becky is the founder of a flourishing Drama Program at Northwood School in Northwood, NH, where she currently produces four shows every school year for students in grades 1-8, with an average cast size of 36 students per show. She was also honored as World Language Teacher of the Year in 2013 for the state of NH.

This is Becky’s second time directing Nuncrackers for the main stage, and her first time working with The Theatre Company of Saugus. She has played the roles of Sisters Amnesia and/or Robert Anne in 7 different chapters of the Nunsense series (Nunsense, Nunsense II, Nunsense Jamboree, Nunsensations, Meshuggah-Nuns, Nunset Boulevard, and The Nunsense Mega Musical), and is excited to bring her passion for the Nunsense series and its characters to the TCS stage. She has had the pleasure of meeting and working directly with the creator of the series, Dan Goggin during her 2013 run of Nunset Boulevard. She looks forward to celebrating the Christmas season – Nunsense-style – with the cast, crew, and patrons of the Saugus area.

Thomas Lissey is looking forward to his first season with Theater Company of Saugus and to working as the Music Director on both Nuncrackers and Clue, the Musical.

Other recent credits include The Full Monty (ACT Andover), Evita and Cabaret (Wakefield Repertory Theater), King of Hearts (Colonial Chorus Players) and Pippin (Northeastern University Theater Department).  During the summer of 2009, Thom conducted a high-school cast in The Who’s ‘Tommy’ with the Stoneham Theater Young Company.

Thom has won four EMACT awards, including the 2004 DASH award for Best Music Direction for his work on Ragtime at the Footlight Club in Jamaica Plain.

A native of New Haven, Connecticut and graduate of Wesleyan University, Thom is the music director at the Unitarian Universalist Congregation in Andover, and is a studio accompanist for The Boston Conservatory.

Mary Moffett, our stage manager, has worked on many TCS productions over the years, and with many other producing groups.