Here is an article about the show in the Saugus Advertiser by Neil Zolot.

Click here for a promotional video about the show.

Click here for an album of photos taken during performance.

Click here for an article about our production in the Lynn Item.

Our winter 2014 show was called [title of show].  This is a very clever and amusing musical about how it was written.  Some people are writing a new Broadway musical about the process of writing a show.  Their show is successful, and so they write some more songs about that.  There are many references to other shows.  The only thing they never quite come up with is a title, thus the [title].

Bobby Imperato had been in many TCS shows.  We welcome the other cast members to our company.  And offer many thanks to everyone who auditioned.

The director was Nicholas Meunier.  He won the DASH Award for Best Director of a Musical for the 2013-14 season, for his direction of [title of show].  He directed our 2012 production of Romeo & Juliet, and will also direct Macbeth in 2014.

[title of show] was also nominated for several other DASH awards, including Best Musical.  The cast performed a selection from the show at the 2014 DASH Gala.

The stage manager was Lexi Deschene.  She directed our 2013 production of The Glass Menagerie.

The location was the Black Box Theater (room C09) at Saugus High School / 1 Pearce Memorial Drive / Saugus, Massachusetts 01906.  Please see our Directions page.  (We had to move the show because our usual venue was under renovation.  Fortunately, the room at Saugus High is well equipped and very appropriate for this show.)

Jeff and Hunter, two struggling writers, hear about a new musical theatre festival.  The deadline for submissions, however, is a mere three weeks away.  With nothing to lose, the pair decides to try to create something new with the help of their friends Susan and Heidi, with Mary at the piano.

[title of show] — taken from the space on the festival application form that asks for the [title of show] — follows Hunter and Jeff and their friends on their journey through the gauntlet of creative self-expression.  We see them write and perform their show at the festival, and learn lessons about themselves as people, friends, and artists.

[title of show] is above all a love letter to the musical theatre — a uniquely American art form — and to the joy of collaboration.  The musical received a Tony Award nomination for Best Book of a Musical in 2009.

[title of show] has music and lyrics by Jeff Bowen, and book by Hunter Bell.  It was originally produced on Broadway by Kevin McCollum, Jeffrey Seller, Roy Miller, Laura Camien, Kris Stewart, Vineyard Theatre, and LAMS Productions, at the Lyceum Theatre, where it opened on July 17, 2008.  Originally produced by the Vineyard Theatre, New York City, in February 2006.  [title of show] was originally presented by Bridge Club Productions at the 2004 New York Musical Theatre Festival.

[title of show] was presented through special arrangement with R & H Theatricals.  www.rnh.com

For some info about the show, see:

A promotional video about our production on our Facebook page. 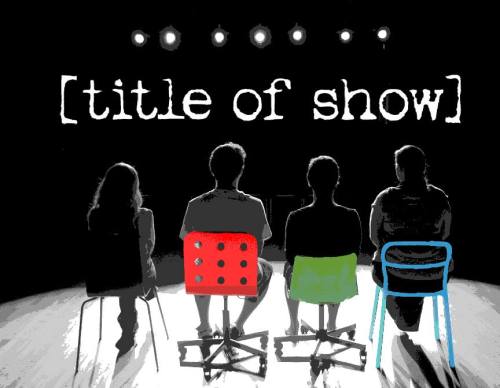