Oliver is a DASH Winner

Posted on August 25, 2012 by lsegel | Comments Off on Oliver is a DASH Winner

William will be given a citation from the Board of Selectmen of the Town of Saugus, at their meeting on Tuesday 23 October 2012, starting at 7:30 PM, in recognition of his DASH award.

We are proud and happy to announce that our very own William Fafard is the WINNER of the DASH award for Best Youth Actor in a Musical, for playing the title role in the Theatre Company of Saugus production of Oliver! in November 2011.

Each year EMACT (Eastern Massachusetts Association of Community Theatres) reviews and rates dozens of shows through its DASH (Distinguished Achievement and Special Honors) program.  The best groups or individuals in many categories are nominated for awards.  The nominations for 2011-12 were announced on July 11, including William’s nomination.  The award ceremony was on Saturday 25 August 2012.  The Fafard family and several other TCS members were on hand to see him presented with the award.

For the complete list of nominees and winners, click here.  Other TCS members who were nominated include Chip Sheeran and Elizabeth Sheeran for Best Prop Coordination for a Play for the Quannapowitt Players production of The Foreigner, and Chip Sheeran for Best Direction of a Play for The Foreigner.  Congratulations to all the nominees and award winners! 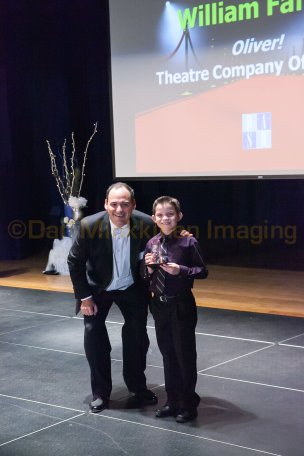