We may not get the big win, but we take risks!

Theatre Company of Saugus brought a cutting of its production of Macbeth, the tragedy by William Shakespeare, to the 2014 EMACT Festival.  Organized by the Eastern Massachusetts Association of Community Theatres, five groups brought shows to the festival, held at Tewksbury Memorial High School on Saturday & Sunday 28 & 29 June.

Here is the link to the photos taken of the cutting of the show presented at the EMACT Festival.  Photography by Rik Pierce.

The adjudicators admired the show; they were fascinated by the director’s concept.  We also heard many nice comments from the audience.

TCS won the Adjudicator’s Special Award for Excellence in Risk Taking.  This award is sponsored by Centre Stage Theatre, Harriet Friedman, and Ron Godfrey, and is given in recognition of notable theatrical risk taking.

Although that was the only award we won, TCS did garner nominations for seven other awards:

Congratulations to the two Outstanding Productions, who will both go on to the New England Regional Festival:  Hovey Players with Rabbit Hole, and Lexington Players with Spring Awakening.

Here is the link to the complete list of Festival 2014 Nominees and Winners.

TCS previously won the Risk Taking award at the 2007 EMACT Festival, for our production of the The Marriage of Bette and Boo.

This photo shows our director Nicholas Meunier accepting the Risk Taking award trophy at the EMACT Festival awards ceremony on Sunday 29 June 2014 at Tewksbury High School.  Awards were presented by cast members of the Burlington Players’ Radium Girls, which won the national AACT festival in 2013. 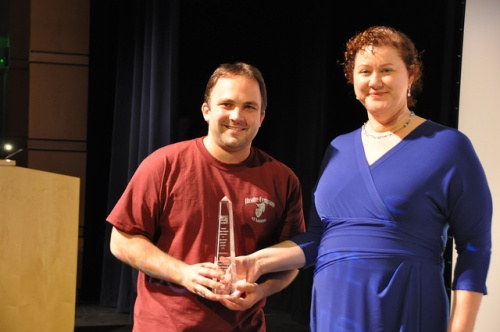 Here we see Amanda Allen (left) accepting her recognition of High Honors in the design competition for her costuming of Frog and Toad.  It was presented by Susan Harrington (right), EMACT board member.